Remix in the Caribbean 2016

Remix in the Caribbean

As part of the Tropiques Atrium Scène Nationale’s Classics Revisited theme for the last trimester of the 2015-2016 season, the Remix in the Caribbean exhibition is coming to the Arsenec hall.

The boundaries between appropriation, spin-off, remix, remake, cover and parody are tight and fluctuating. Stretching appropriation and remix between respect and rupture gives pre-existing pieces a new beginning by recontextualising them. How did Caribbean graphic artists seize upon this combinatory method true to contemporary art? What issues arise from the gap between spin-off pieces and original pieces?

Appropriation in art is an old and ever-changing custom. For example, Eduard Manet’s Olympia (1863) has been redone by Oneika Russell from Jamaica and Thierry Tian Sio Po from Guyana is inspired by Giorgione’s The Sleeping Venus (1510) and Titian’s Venus of Urbino (1538). Edouard Manet himself took inspiration from bold past artworks but with the aim of making them look better by focusing on the perspective, model, contrast between light and dark and meaning by putting a contemporary spin on classic themes. 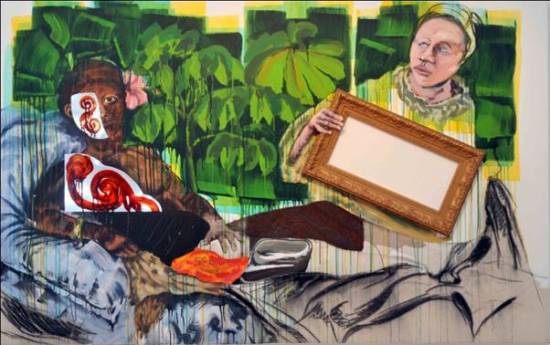 Just like Picasso copied Eugène Delacroix’s Women of Algiers (1834) and Las Meninas (1656) by Diego Velazquez countless times between 1954 and 1955 before Roy Lichtenstein put his own spin on Picasso, these Caribbean artists are updating artistic masterpieces and redoing them their way. “I don’t feel I’m doing parodies, I feel I’m reinterpreting an earlier work in my own style, as did Picasso, when he reinvented Velazquez, Delacroix or Rembrandt,” said Roy Lichtenstein. (*)

These appropriations, be it in homage or derision, create a dialogue between the artists through the decades or centuries whilst making the artist consider and question their own work. This is true of the remixes by Ciro Art and Ruben Alpizar. The painting is the subject of their work. Appropriation and iconographic recycling are a constant in this scholarly art form. Ciro Art creates an exhilarating mosaic of fragments borrowed from paintings and sculptures from bygone centuries and contemporary features such as cartoons, ads and crime fiction often bordering on kitsch. Ruben Alpizar has a classic style that elevates the choice of tools, pencil or watercolour on paper.

Marcel Duchamp brought a playful and parodic side to appropriation when he wrote L.H.O.O.Q.  (1919) beneath the Mona Lisa. This iconoclastic touch can be seen in Alpizar’s La Revancha series and the digital fairytales by Jean-Baptiste Barret. The sense of strangeness in Barret’s work undoubtedly springs from the juxtaposition of abandoned, disillusioned and usually night-time urban landscapes with characters taken from art history inspired by anyone from Raphael to Gauguin. These contradictory worlds are steeped in subtle humour. Jean-Baptiste Barret and Ruben Alpizar share this light-hearted irony and a unique remix approach separating and removing isolated silhouettes rather than appropriating an entire piece.

However, the majority of works use remix to address questions about the three identity issues: gender, ethnicity and sexual orientation. This contemporary trend is very much in fashion, particularly among graphic artists using photography from the 70s and 80s.

To challenge the absence black people in art and among artists, Renée Cox and René Peña elevate the beauty of the black body in fictional self-portraits. René Peña embodies Jacques Louis David’s Marat (1793) and Donatello’s David (1430-1440) whilst Renée Cox presents herself as Olympia (1863), a nude in Edouard Manet’s Déjeuner sur l’herbe (1862-1863) or the Grande odalisque by Ingres. This assertion can take on political, social and feminist overtones in Renée Cox’s more provocative pieces such as Yo Mama’s Last Supper and Bullets at Green River, inspired by The Last Supper (1495-1496) by Leonardo da Vinci and St. Sebastian (1480) by Mantegna. 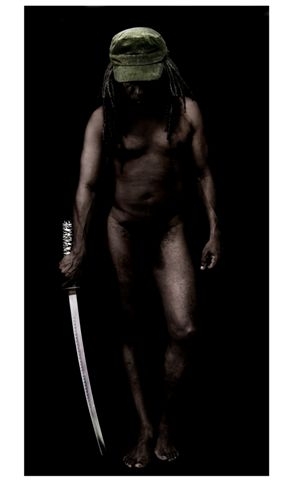 Black people’s minor presence in art history and secondary status in society is underlined and questioned by the inversion of Manet’s characters’ ethnic groups in Thierry Tian Sio Po’s work by gradually erasing the white mistress to the point of blending into the background with Oneika Russell or by replacing Europeans with mixed race models with Marvin Bartley.

By reversing the servant and mistress’ ethnicities, Thierry Tian Sio Po uses irony to stigmatise the lack of Caribbean art on the international scene and rebel against conventional racial and social portrayals, just like artists such as Larry Rivers in I like Olympia in Black Face (1970) or Wenjue Zhang with Self-Portrait: After Olympia (2013). As for the Japanese artist Yasumasa Morimura, he performed the role of both Olympia and her servant in Portrait Fugato (1988) adding the issue of gender and sexual orientation to the question of ethnicity.

Manet’s painting, Olympia, was a pastime for artists who were passionate about art history; so they redid it and put it into their personal context. This produced feminist, post-colonial and racial reinterpretations of it. I still think that these artists focus mainly on the character of Olympia in their work. They’re rarely interested in the other character, the servant. I wanted to give this character depth because I can identify with her. What was her story? At the time, I used a motif to portray certain standard trends of westernisation and colonisation which is why I decided to use this painting to produce a drawing and put this motif into it to modify the famous piece and incorporate my own visual language.

Since I was researching time and animation back then, I made a series of prints from the original drawing. The sixteen resulting proofs were part of an exhibition along with an animation of the drawings and printed proofs.

In his photographic reconstructions of pieces by past masters such as Rubens, Botticelli and Delacroix, Marvin Bartley replaces European characters with models from the Antilles to criticise the dominant cultural Eurocentrism whilst addressing contemporary Jamaican issues: religious faith, the close relationship between a dark or light skin and climbing the social ladder.

Joiri Minaya’s collages question the exotic and erroneous vision of women of colour that modern painters, from Gauguin to Enrique Grau Araujo, share in their paintings.

To shatter these clichés in both modern art and contemporary tourism imagery, Joiri Minaya takes inspiration from women of colour portrayed by Gauguin, Vela-Zanetti and Grau Araujo as well as images from websites “for men who like exotic women”. Body parts are isolated then incorporated into new digital pieces.

Who portrayed who over the centuries? How? For whose benefit? The artist encapsulates the link between historical works and contemporary tourism adverts around double articulation, man/woman, coloniser/colonised.

In Russell Watson’s portraits, the models’ personal items are matched with their faces to underline everyone’s pastimes and experiences and show the bond that Caribbean immigrants still have with their homeland.

Remixing also breaks down barriers between disciplines that so characterise art today. These contemporary interpretations of past artworks go hand in hand with technique exchange: from painting and post-modern photography with Renée Cox, Jean-Baptiste Barret, Marvin Bartley, René Peña and Russell Watson to Joiri Minaya’s digital collage and Oneika Russell’s film animation. The transformation goes the extra mile with Christian Bertin, Ruben Alpizar and Thierry Tian Sio Po when the item replaces the painting in which it appears.

These few examples of artistic remix that’s been rife in the Caribbean since the early 80s form a bridge between classical art and modern or contemporary art. They discard the original’s meaning and recontextualise it to give it fresh meaning. The most important thing is the disparity and the message it conveys to put a fresh spin on art history or a clear vision of the world today.