Raquel Païewonsky invited at the next Venice biennal with Quintapata

Could you  tell me first the different stages or steps of your artistic research from Vestial exhibited in Martinique in 2004 to now?

Vestial was a very important project for me, I presented it during the Caribbean Biennale in 2001, that was the year that I moved back to the Dominican Republic  from New- York . It was a new beginning for life and art. Before that I did mostly paintings and some sculpture and installation but this was a whole different process; it took over two years to complete this series, a lot of research, a lot of testing, a lot of drawings and for the first time dealing with the logistics of bringing such a production abroad, getting permits to show it in the right space, making a book etc.

This is very much the way I deal with work today, I am not only making art but often  I am creating a project along with it. With time I have learned to simplify, trust and be more proficient.

Every experience, every medium, every piece of work has an impact on what is to come.

When, where was your last exhibition? What were  the title and the statement?

The show is named im propia and was exhibited in Centro Cultural de España in Santo Domingo.

It presents works of photography, sculpture and installation. It is a show concerned with the body,

It explores the relationship between our essence and our surroundings, the impact of stereotypes and cultural constructions, always taking as a reference our instinctive  selves and the ways in which the primal component of our nature is affected by the new and ever changing contexts of contemporary life.

I use the body as a platform that allows me to approach from an individual perspective, broader  topics ranging from the social, philosophical or political.

Could you tell some words about your recent artworks, the photography series Enlace, One and the installation Inopia?

Enlace: This is a piece about long term relationships and it was performed by a couple that have been together many years. It suggets different emotional and physical connections.

Inopía: It’s a room covered with hand embroidered white linen breasts. I use the breast in my work as a symbol of human connection, intimacy, nourishment and universal feminine energy.

This is a child ‘s room that refers to the loneliness lived by children in western society, being raised resisting the natural bond that secures them at the beginning of life and that will last a life time.

One: This work is about gender stereotypes and comments on the masculine and feminine energy in all of us.

I read that Quintapata will be in  Venice during the next biennal? Will you present a collective work or not?

Yes, we are quite pleased with this invitation. We have been invited by IILA (Instituto Italo Americano) that presents works from Latin American countries at the Arsenal, a really beautiful and well situated space that became available in 2009 for the IILA. We will be presenting a collective work that is a video installation.

Why did you create Quintapata?

Quintapata is a group of four contemporary Dominican artists: Pascal Meccariello, Raquel Paiewonsky, Jorge Pineda and Belkis Ramírez. We came together with the purpose of creating art projects that facilitate the dialogue between the local and international art community.

Quintapata intends to serve as a platform to enable cultural projects that promote contemporary dominican art and that raises awareness and understanding of this type of language in our country and abroad where often we are perceived within a scheme exotic art and limited to small stages.

We united as a group four years ago with a project named Mover la Roca sponsored by the Spanish Cultural Center. This show was able to travel across several Latin American cities. We made three subsequent projects and several of them have been exhibited at venues such as The Biennial of the End of the World in Ushuaia, Argentina and The Havana Biennial in Cuba. Although we have strong careers as individuals, we consider this union as a mechanism to strengthen our ability to produce major projects that have an impact and engage the Dominican art community as well as the community at large. We are also very interested in stimulating dialogue and exchange within our projects. Art education has been one of the cornerstones on which we formed as a group. 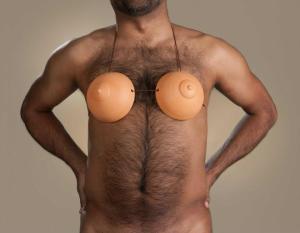