“Nos barques sont ouvertes, pour tous nous les naviguons  » (We are sailing for all, on these welcoming caravels) (1)

( We are sailing for all, on these welcoming caravels  )

On the eve of May 22nd when Martinique celebrates the abolition of Slavery, one among artist Victor Anicet’s monumental sculptures was inaugurated on the Saint-Etienne plantation. This caravel, The Vision of the Vanquished, made of black corrugated iron three millimeter thick, with its imposing size, six meter long and three meter eighty high is a private order from Florette and José Hayot.
Les Foudres HSE stands in the middle of Habitation Saint-Etienne in Gros-Morne Martinique, as a unique architectural group of buildings and is classified in the additional inventory of historical monuments; today it constitutes one of the last and most beautiful element of the martinican patrimony.

Les Foudres HSE, formerly a rum storehouse has been transformed into this artistic and cultural site. This is an original site which includes a bar, a sound system, a screen for projections, and which is fitted with the appropriate lights for exhibitions, lounge tables and armchairs and chairs. According to the different requirements it can accommodate between eighty and a hundred and fifty people. The place regularly hosts concerts, conferences, film projections, readings or live performances: as a place of meeting and exchange it is open to visual artists, researchers, poets or musicians…
The philosophy of Les Foudres HSE lies in the sharing of imaginaries, perceptions and thoughts. Because people here know that one imagination remaining recluse will wither, that a perception that sticks to its own views fails to enrich itself from other views, and a thought that does not meet other thoughts will soon be reduced to a cliché. 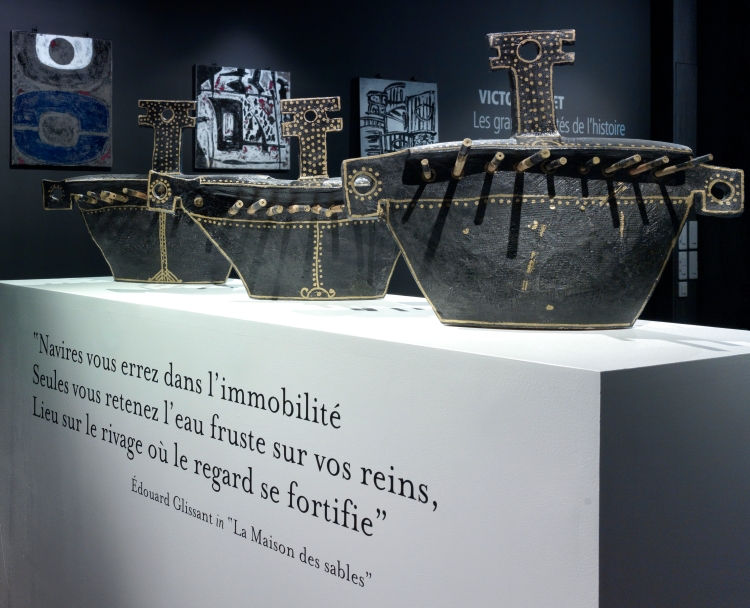 The preceding work leading to this monumental sculpture by Victor Anicet in the gardens of Habitation Saint-Etienne were the three ceramics exhibited at the opening of his show Les grands projetés de L’histoire –or the great things history projected- in October 2012 in Les Foudres HSE.
One line from Edouard Glissant accompanied then the contemporary version of Christopher Columbus’s three caravels the Niña, the Pinta and the Santa Maria.

You vessels sail in immobility
You alone keep the rough waters on your flanks
the place on the shore where our gaze is made strong .

From earthenware to metal, from the object to the monument, there have been countless tasks in a warehouse in François; such as modifying the size, defining the adequate three hundred by thirty centimeters module, overcoming the technical difficulties with Michel Pétris’s assistance, a designer and sculptor specializing on metal who masters every technique in welding. Then there was the welding and fitting the rivets to the boat.
‘It is up to the contemporary artist to perform the rites of passage’, says Victor Anicet. The tragic chain was broken. The artist’s function is to unveil the unseen as this island conceals many secrets.
As an artist, a creator of images, I stand on the threshold of worlds. I would like to be the witness to the voyage: the boatman. Restitute instead of reconstitute. Restitute to the largest number of martinican people the traces that I felt I had found’.
Restitution is the main element in Victor Anicet’s visual production.
https://aica-sc.net/2013/09/27/victor-anicet-restitution/

Victor Anicet was born in Marigot, in the North of Martinique. In 1967 he returns to his native land after studying in Paris, in institutions such as Ecole des Métiers d’Art and the Arts et Métiers, and practicing several years with potters in France, Germany and England. As the founding member of Fwomajé, a group of artists committed to the research of Caribbean aesthetics, he explores the Amerindian vein: ’We all are Amerindians: the bow net that you throw to catch fish is Amerindian, the stems of amaranths that you weave to make baskets is Amerindian, the whip named balata is Amerindian. We are all Amerindians’ .
In the public sites of Martinique, many works created by Anicet can be seen: these are public or private orders.
Two creations were realized in the General Treasury of Martinique and La Meynard Secondary school. The term 1% artistique, is a specific procedure for public order concerning art works and it constitutes an original opportunity for public order executives, artists, architects and the general public to meet outside the institutions exclusively devoted to contemporary art.
According to the law the builders of public works must allocate 1% of their expenses to ordering or purchasing one or more art works specifically designed for the building constructed. First limited to the Ministry of National Education buildings when it was created in 1951, the device was extended to other sites and is now compulsory for most of the governmental public constructions, the territorial collectivities, as long as they are limited to their competences.
One work, Restitution was selected to be represented in the publication for the Ministry of Culture, Editions du Patrimoine- Centre des Monuments Nationaux, Cent 1%, for the sixtieth anniversary of this procedure.

Victor Anicet was also the creator of the contemporary stained glass windows of the Saint-Pierre cathedral, and this also was a public order from The Ministry of Culture. The aim of public orders is to show the close association between the different governmental institutions (Ministry of Culture, Ministry of Communication) and the multiple partnerships (territorial collectivities, public buildings, or private partners); it contributes to the improvement of our environment, to the development of the national patrimony, as it shows art works outside the specific institutions devoted to contemporary art. Public orders are also a means to make available for artists a tool that will allow them to create projects, whose scope and implications and size necessitate unusual means.
Public orders then include an object and at the same time a process (this is art overpassing its limits and trying to meet the public in their usual environment and their public space); different steps illustrate this process, from the patron’s initiative to the realization of the final work and the moment when it is revealed to the public.
Moreover, Victor Anicet’s work has been solicited by numerous municipalities, in Schoelcher, Marin, and Basse-Pointe, and also by private orders, for Auberge de la Montagne Pelée, The Church in Schoelcher town center, the SATEC, and the Fond Lahaye Primary School.
This last creation will be the sixteenth for the public space of Martinique.
‘Everyone needs the memory of the others, because there is no virtue such as compassion or charity, but the virtue of a new awareness in the process of Relationships. And if we wish to share the beauty of the world, if we wish to share its suffering, we must learn to remember together’ .