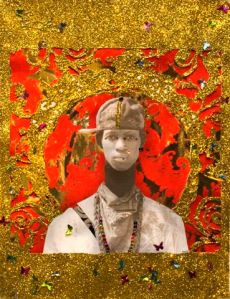 C-How do you think Jamaican art is engaging with popular culture?

E-There is still a very tiny fraction of artists dealing with popular culture. In my case, my work responds to a lot of images and issues and languages that are related with popular culture, and also artists like Leasho Johnson. He also in some levels is in touch with popular languages. There is still a wide disparity in terms between what happens in the visual arts and what happens in popular culture. I think people are more kind to response to social events. There are other artists dealing with issues of identity, but I think the conversation have shifted in a sense where issues like gender are more important; my group is also dealing with issues of autobiography, or even with self. 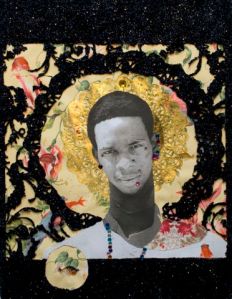 C-How do you conceive the role of dancehall culture in your work?

E-My engaging with dancehall happen when I was very, very young. Dancehall has always been for me the place that has to do with a kind of cultural arena. We have learned about the latest happenings, the latest slangs, the latest dances. But it also becomes a kind of real farm in understanding the Jamaican society. It has a lot of contradictions: especially because a lot of songs go back and forth church songs, there is still the need to connect with a kind of Christian understanding, but also a need to build off that understanding. In my own work, I am looking to how ideas about masculinity function within dancehall space, which I think is really interesting, particularly related to what has been happening in the last five years or so, in terms of physical changes that have been happening with the males. 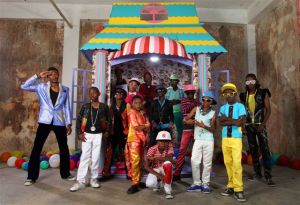 C-And how did you started analyzing the issue of skin bleaching?

E-My interesting in skin bleaching began to start when I saw men practicing it. It is something that I relate with my interesting in women and men representation, in beauty and the grotesque. When I saw men using this practice that was seemingly grotesque, and something that is also associated with feminine practice, I thought that was really important. And also too I remember when men started bleaching, there was also a changing in the outfits they were wearing. What I am trying to do is to raise questions about what does masculinity mean, and then how does that really function within dancehall space and dancehall aesthetics. 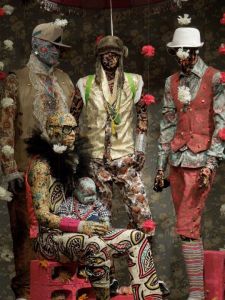 Ebony G. Patterson
Detail, Swag Swag Krew, Fromt the Out and Bad Series, Mixed Media Installation with Mannequins,Flowers, and Alchohol,Variable Dimensions, Installed at the Bermuda National Gallery @ The Out and Bad Exhibition, Hamilton,Bermuda, 2012

All the images are courtesy of the Artist and Monique Meloche Gallery.