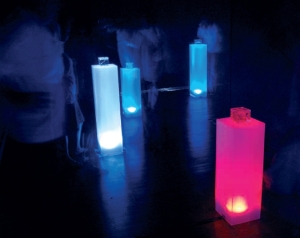 The Little Haiti Cultural Center is pleased to present Global Caribbean IV: French West Indies & Guyana, Focus on the contemporary expression, which is being held in conjunction with the Art Basel Miami art fairs. This event presents an opportunity to re-think the position of contemporary art from Martinique, Guadeloupe, and French Guiana, known collectively as the “Départements français des Amériques.” These territories confront two challenges: that surrounding their integration in the Caribbean artistic context, and their insertion in their international art market.

There are many factors – historical, political, and linguistic – that have impeded a full integration between the “DFA” and their Caribbean neighbours. Within the region, the multiple linguistic affiliations (hispanophone, anglophone, francophone and nederlandophone) lead to a privileging of relationships with former colonial overseers. The Spanish speaking Caribbean, with its twenty-five million inhabitants, is home to the first museums and biennales in the region, is tightly connected to the large continent of Latin America. The seven English-speaking islands, along with the archipelagos of the Bahamas and the Grenadines, benefit from the dynamism of their diaspora in the United States and the United Kingdom. The DFA, however, are comparatively isolated, and its artists are not sufficiently integrated into Caribbean currents of art. They are rarely represented in recent exhibits covering the region, such as Who are more sci-fi than us in the Nederlands(2012), the first triennial of the Dominican Republic in 2010, or the two last Havana Bieannales, 2009 and 2012. That is, of course, partly simply a reflection of demographic reality, since among the thirty-eight Caribbean nations or territories there are only three “DFA”. Unfortunately, artists from the French Antilles also have limited exposure in the international context, in contrast to artists from Cuba and Haiti (such as Lam, Télémaque or Kcho) who are recognized both within in institutional circuits of diffusion and the international art market.

Any attempt to increase the prominence of artists from the DFA in a global context must begin with a good understanding of two critical processes: the workings of distinction and institutional circulation within museums and biennales in the world’s art capitals, and insertion of art works into the international art market through galleries and auctions. Based on such an understanding, we can confront the following questions: Which strategy will most efficiently promote those artists who wish to gain access to the international market? How does one move from regional collecting to broader international recognition? Is there a synergy between what is being produced by artists in the “DFA” and the preferences of the international art market? How do we promote this visual production and attract attention to it with the support of museums, collectors or galleries?

The first step will be a better structuring of distribution within the region. Far too few public institutions have invested sufficiently in the promotion of the contemporary art production of the French Antilles. More selective programming, better exhibiting strategies, the cultivation of better access to the media, and serious partnerships with international institutions are essential. In this regard, the Fondation Clément, a private entity which is a major partner in this fourth edition of the Global Caribbean in Miami, in partnership with the Little Haiti Cultural Center, is playing a pioneering role.

There remains a significant gap between two forms of production and distribution. On the one hand, there is the pursuit of coherent artistic expression based on a critical understanding of artistic practices, mastering of mediums, the experience of perception, and the relation to broader contexts. On the other are works that cater to the decorative expectations of the public. In the absence of the key institutions that structure the art market – museums, art centers, collector’s associations, professional galleries integrated into the international market – the distinction between the two is not well recognized. Most artists sell there work outside the structured market, offering it directly to the public according to their own evaluations and pricing, and which doesn’t allow them to be judged or ranked by the structures of artistic legitimation. The result is that they don’t have access to a secondary market.

Given this understanding of the current positioning of artists from the DFA in the art market, let us know look at their artistic practices and what this tells us about the creative options they have. “Verticality”, totems, anthropomorphic “assemblages” dominates the work in Global Caribbean IV. But in the works of Luz Severino and Christian Bertin the presence of coats and shoes also testify of the absence the human figure. 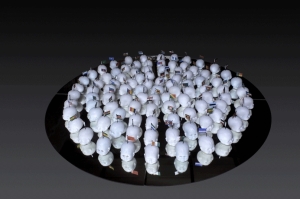 Many of the pieces include recuperated material, whether integrated in assemblages or as part of installations. Picasso revolutionized the sculptural medium in 20th century Europe by means of this technique, which is also prevalent in what is referred to as the “arts premiers,” or “primitive arts.” This approach fits with current foregrounding of the practice of creating assemblages and installations, where there is less concentration on technical mastery, the magnification of the medium, or academic perfectionism, and the prime focus is instead on the conceptual or thematic.

The proximity of installations and sculptural assemblages within this exhibit help define its distinctive characteristics. Several pieces are composed of diverse elements, discarded objects that contain proof of life, but each uses the material in a different way. In most the recuperated materials are integrated directly in their original state, but in other pieces they are transformed in the process of installation, like the fried paper used by Ano or the braided paper of Valerie John, glued and layered to create a rigid shield. The relationship to space and to the viewer also ranges in these pieces, between some where the piece is viewed face-to-face and others in which we are immerged or circulate within the work.

The installation L’élévation, by Ano – which will unfortunately not be presented in this exhibition for technical reasons – is a superb example of this. At the crossroads of design, graphic art, staging and sculpture, the work dialogues with the space and invites spectators to circulate within its lit, pastel columns. Each of these stages, in the manner of a museum, small cubes in “altuglas” filled with viscous liquid in which floats miniature inclusions of copper wires and fried strips of paper. It is an interactive installation which lights up when approached, and turns off immediately afterwards. The rapid return to darkness is a reminder that we only can ever perceive a tiny and evanescent part of ourselves. (2)

As it does in L’élévation, light functions symbolically in many of the works,  representing the ineffable mystery of identity (3). In the installations by Ernest Breleur, this light takes on a poetic function. His work incorporates X-ray sheets, stained plastic sheets, staples, as well as rope lights or small projectors, and these lit pieces change our reading of these forms, reinforces their visibility, and gives the entire ensemble a spectacular look.

Since the work of Duchamp, contemporary art has expressed a conceptual consciousness, relying on self-analysis and critical deconstruction. Here, Ano and Thierry Tian Sio Po question the context in which the “creative act” emerges in the DFA, as well as the positioning of the Caribbean artist within the international artistic context. Ano’s armchair, curled up in a sweatshirt but placed askew, is a metaphor for his discomfort he feels in the act of creation given the slow emergence of an art tradition and the lack of affirmation of sculptural work in the region. (2). The same discomfort is expressed by Thierry Tian Po Sio, particularly his work L’image de l’occidental dans la peinture caribéenne (The Image of the Westerner in Caribbean Painting) – a remix of Manet’s Olympia. As Sio writes, “The idea for this work comes from my consciousness of our inability to access « contemporary art » in the languages ​​that they initiate. We are very far from the conceptual contexts of these languages. But it seems to me that there is something to be found, which necessarily binds us to our historical-social context, because we do not have 2000 years or 5000 years of history of artistic work in the colonies, only 200 years of traumatic construction and deconstruction (4).

An unexpected interpretation of an original work of art, the remix suggests a new reading. Thierry Tian Po Sio’s work is part of series of reinterpretation of Manet’s famous Olympia by Cézanne, Picasso, Dubuffet, Basquiat, and perhaps most significantly Larry River’s (I like Olympia in Black Face-1970-USA) and Oneika Russell (Olympia Variations – Jamaica). The parody by Larry Rivers, based on systematic inversion of black and white, seems to be a condemnation of the stereotypes used for the representation of blacks in Western art as well as a critique of the American context of the time. The series Olympia by Oneika Russel is also a critique, but uses a different procedure. It challenges these stereotypes not through inversion but rather the gradual disappearance of Olympia in the background of wallpaper to put the spotlight on her black servant. The parody by Thierry Tian Po Sio, in turn, is a reaction to the hegemony of Western art – symbolized by the heavy gilt frame –  and the weight the art of the “Center” has on production in the periphery. It is also an invitation to create new languages ​​which allows us to escape from this “rigid framing,” the dominant and condescending attitudes of the “Center.” In the same way, the piece Contraintes corporelles (Corporal Constraints) is an exhortation to leave behind the constraining and inadequate codes of dress in the context, in pursuit of a renewed style and way of life.