In the Grand-Saint-Pierre Project, for whose conception and coordination Martinican writer Patrick Chamoiseau has been assigned, a call for artistic projects was made in the late months of 2012 by the Parc Naturel Régional – the institution in charge of the natural reserve of the region- who is supervising the whole project. This is the first step towards numerous large-scale projects.

The main objective is to extend as much as possible the international quality of the city. In order to initiate this evolution, a group of visual artists was invited to create, using mahogany wood cylinders five meter-long, thirty-two totems to be erected temporarily at the southern entry to Saint-Pierre.

Every artist will describe his work. These different interviews start with Annabel Guerrero’s answers.

In 2006 Edouard Glissant wrote the preface of your book Totems: Did this meeting with the writer help you create connections with Martinique?

Annabel Guerrero: I feel great admiration for Glissant’s work and also for the deep humanity and generosity in his thought. I met him in 1993 in Strasbourg during the foundation of the International Parliament of writers when I became their photographer. I have often photographed him in Paris and in Grenada and Venezuela too. In the summer of 1996 while staying in Venezuela he had written a new text for an exhibition in Galeria Minotauro in Caracas: The Unmoving Glow of this Fire.

Reading Glissant’s texts I learnt about Martinique the geography of which is so close to my country Venezuela. Edouard Glissant’s work is the same as this rhizome he so often mentioned; it extends, or sediments or fertilizes the imagination of so many creators who followed him all along his life. These thoughts have also fostered a great part of my photographic work dedicated to memory, exile, migrations and the notion of border.

Your first exhibition in Martinique was in Fonds Saint-Jacques Cultural Center where Suzy Landau, the former Director had invited you, then you paid two visits to CMAC National Scene in Martinique, Totems in 2006, and Borders-No limits in 2008. You were also invited to read about and show some photos from Voices of the World in Fondation Clement during the Caribbean Atlantis event. You also work on numerous projects in Martinique: can you tell us more about them?

AG: I created Souvenances –Remembrances- an installation for the Savane in Fort-de-France: this is a metaphor for memory and a way to pay a tribute to the heroes of freedom, and to their resistance against a colonial slavery system. This Memorial underlines through its size the nobleness and greatness of the heroes of resistance.

This project explores the concealed memory of some countries in the Caribbean that yet share a common slavery history.

I am currently a participant in The Grand Saint-Pierre Project and I am creating Oeil Mémoire–Memory Eye: there are nine totems or photo-sculptures.

Is the Totem photo series related to the totem-sculptures that you are creating now for the city of Saint-Pierre?

AG: In both works I used the totem shape that is also present in the Souvenances –Remembrances- project.

Oeil Miroir – Mirror Eye- is an installation with nine totems and the spectator is asked to walk between the pieces. This is a visual experience that interacts with and echoes the history of people in Saint-Pierre.

Each totem is different, as it is composed with a metal structure with above the photo of an eye. This eye is turned towards nature and at the same time towards the memory and history of Saint-Pierre. Like a mirror it faces us, and in it people can see their reflections, these eyes observe us and in the same way they reflect a history. Six totems are covered with one or two transparent photos inserted in structures representing the portholes of a ship through which the spectator will see images of Saint-Pierre in 1902 along with recent images, and also there will be images of hands. The nine characters are in groups of three, and on the central structure of each group of three totems, poems by Aimé Césaire and Edouard Glissant are engraved. 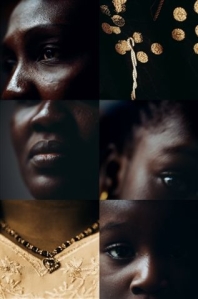 How do you switch from photography to sculpture?

It is the same photographic work that urged me to use shapes close to sculpture. The series Totems, à la Frontière –Totems, at the Border- that was created at the border separating Venezuela and Colombia was already a monumental piece. These Guajiro women that I had made from three pieces so that I could enlarge them had a specific status. They were erected at the border of Venezuela and Colombia like icons of resistance, or totems. Eighteen images compose this photographic series of Totem women, standing there, massive, noble and sedate, evoking the wayù women, upright and solitary women, in a barren and inaccessible landscape.

Like beings held out of temporality, these are women who promise survival, and they are those who keep the heritage and traditions of the Guajira race, one of the most important and most numerous ethnic group in the northern regions of South America.

The forward-facing aspect of these images, the narrowness of the space around them, the organization of the lines and their tautness, build a dramatic scene inside the photo. These images are close to sculpture in their massive and drawn-out aspect that overlaps the scope of our vision. The close-ups and the cutting up and reorganization of reality help to make them appear oversized.

Working on this project was for me a first attempt to leave aside two-dimensional photography that you set in a frame and hang on the wall. Setting these photographs in space was required by these women; they were genuinely upright.

Later on I carried on this quest for a third dimension in photography as I worked on a project for a public project for the town of Evry, Voix du Monde -Voice of the World- which was the result of an artist residence: I tried to draw a portrait of a city ‘recomposing’ it from fragments, so as to draw a new identity not referring to a unique country or a unique nation or state. It was meant to be a plural and multicultural identity… an identity to the borders.

This project led to the suggestion of a ‘photo-sculpture’ installation for a public space using new material such as black granite and copper.

For me this work illustrates the concept of memory-displacement. Six poltyptichs or fifty-four images in space like a flag. Voice of the World is a ‘world-banner’ flapping in the wind.

Would you tell us about your sculpture project for La Savane?

I suggested the sculpture project Souvenances –Remembrances- for the city of Fort-de-France which is an installation of two totems in two dimensions made in polished black granite on which black and white photos will be engraved with a laser. On the first totem there will be two photos on the front these will be faces from Martinique. On the back of this totem which will be made in stainless steel there will be the names of slaves, rebels, revolutionaries, and the dates of collective conflicts and insurrections, as a tribute to the heroes of freedom. This steel structure is also like a mirror that reflects a second black granite totem with on the front the diptych, a woman representing Africa as the mother-earth. Through this portrait we mean to express the memory of this Africa that persists through exodus: at the bottom of the slave ships the Africans had taken with them the remembrances of tales and myths, of rhythms and drums, of dances and trances, the golden age when the African man was proud and strong…

What photographic project are you working on now?

I have several projects: One part of Obscure Memory has already been exhibited in Paris; La Ville des Colonnes –The City with Columns (Cuba), Cité Fragile –Fragile City- (Venezuela). But I plan to organize a new exhibition of the work I did in Martinique and Puerto Rico. And another project now in progress: Le Tremblement du Temps- Time Quake that deals with the concept of movement-displacement which aims at transmitting the idea of the continents displacement, one continent overlapping  another through the migratory fluxes of populations to reshape the maps of the world. In this installation I work on the mechanical movement and the kinetic movement.