What race leads you forward,

Where the first word springs forth

To the transparences of today, when clamour

Dies out and prophecy is established?*

‘This quote by Edouard Glissant is the right illustration for my entire work as an artist. My artistic production started rather late as I was nearly thirty-five, and my work as a painter lasted between 1983 and 1994.’

In 1984 I founded the Frwomajé Group to promote Caribbean aesthetics with some friends artists; this is when I started my life as a painter. From then on I have been in search of the dreamed Africa. Actually my art career has only started truly and freely since 1989 after seceding from the group.

In 1989, the year I published my first manifesto I acknowledged the necessity to break off with the dominant ideology concerning local art. I discarded the pre-established curriculum in art creation. Editing this manifesto caused a minor shockwave and allowed artists to reorganize around the idea of contemporary art.

From then on I resolutely decided on painting and the questioning that it induces. How to paint becomes more important than what to paint.

So I set out to fight all forms of academism and particularly in what concerns contemporary art.

All along these periods of breaking offs and ‘discoveries’, I asked myself about formal issued related to my art, I questioned meaning, and space, and representation, and how to deal with surface, material and lines, and so on. I place my work within the field of Fine Arts.

‘Breaking offs’ are actually my new questioning spaces, coming out from the development of the series that I painted. It was clear in my mind that I never considered one series as an end, but a step that would lead to further questioning. The necessary obligation to avoid any self-satisfaction towards my art forces me to never accept my creations as completed or as the climax of my artistic work, but only as a possibility to reveal new creations.

During the perilous exercise of art creation, an artist must, however fragile he feels, remain lucid like the tightrope walker and never forget to question himself. He never finds anything, he always searches for something. And this is when the consistency of the work is revealed and when one starts taking risks.

From Mythologies of the Moon (1989) to the Christ series (1994). I have constantly kept a distance with colonial history and even more with the issues linked to our search for identity.Questions such as man, death and life, otherness are at the core of my artistic creation, as well as contemporary expression. Those are the main bases for my work. To these I could add my determination to progress around questioning issues.

These phases differing strictly from one another result from distinctive preoccupations.

A baroque and lyrical period, featuring within the limits of the painting grotesque women characters, heavy but floating, paradoxically making their bodies feel light, their entire weight resting on whatever is the most tenuous (unstable stools, wobbly ladders…) constantly ascending frantically towards the moon.

So here the artistic action means to be dramatic, everything is under pressure, headless bodies in their blindness, and souls ascending towards heaven, not like the common idea that only the soul should reach heaven. During this phase the bodies are going through an ordeal, body and flesh are mashed just like the bodied in Bacon’s paintings.

The Grey Series ends the Mythologies of the Moon. The body being shortened and circling what is left of the moon ready to disappear. This situation is less dramatic in the painting space that is monochrome or almost.  Here the bodies are heavy and round and satellite-like, obviously enjoying to have escaped from gravity. This short series reveals my fascination for Ruben’s works and my admiration for his reductions.

This series is the most poetic, the most delicate and nonetheless tragic. The dead body lies on the bed –a battle field- with its unique ‘ornamentation’, roses scattered on the pictorial setting. After death, the body spread on the white sheet of the canvas exhibits its deliquescence until the moment when a dark trace or shadow appears: the body has vanished. 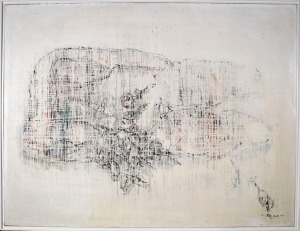 This series that completes my project comes from a triple coincidence, or triple event:

– The observation of the leakage on the wall where I painted inside my studio.

– The observation in the Lareinty factory, a place that was then inexorably decaying, of the remains of a dead dog: a few bones and above all a trace that suggested that the body had liquefied on the floor.

– The war in Bosnia- Herzegovina. No doubt that the elements in each of my paintings refer to the tragedy of this war, but also generates the idea of all flesh is melting.

Death hovers in all my work, the Tombs Series ends the issue about the physical existence of human life as if I had completed this part, not to find some kind of answer to this, but just to complete my painting experience.

This series Tombs has led me to long visits to some alleys in cemeteries, wandering between withered flowers, or flowers breathing their last ’sighs’. There I could feel ‘stifling’ smells and feel heavy silence.

The series Tombs comes as a sort of confrontation with the idea of death, some kind of test for me to get informed about such a personal experience. 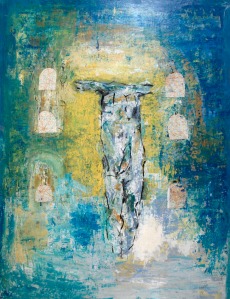 This series ends my painting experience, the last shot of my tribute to painting; I have never tried to impose some reflection of a religious sort, completing my questioning of the ephemeral body, and the question of life after death. This work comes as the ‘logical’ end of the much abused body that is bound to disappear, a terrible feeling.

In the multiple representations since the advent of the Christian religion the Christ’s body has always been represented as a battered human body.

I could not resist the temptation’.

*Quoted by Edouard Glissant as a comment for the White Series, ‘50 and one only stanza to veil and unveil’ in the Catalogue of M2A2 collection, Maison de L’Amérique Latine in Paris, September 1999.