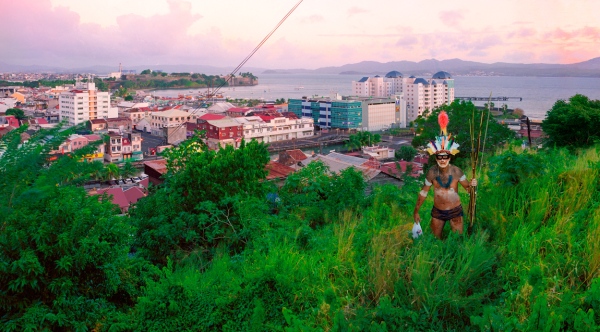 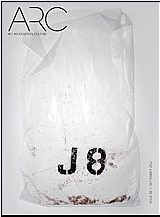 An archaeologist by training, Jean-Baptist Barret has been working as a photographer since 1991. Winner of the 2002 Arcimboldo Prize, awarded by Gens d’Image, the HP Foundation and the Maison Européenne de la Photographie in Paris, he has participated in numerous exhibitions in Europe and in the Caribbean. Barret, a numéonirique or ‘digitalist’, has been practicing computer photomontage since 1998. Citation, references to the history of art, subtle humour, and an outspoken attention to landscape are the constants underlying the series Contes de nuit [Night Tales, 2002], and S’insérer dans un paysage [To Insert Oneself into a Landscape, 2007].

To decrypt and familiarize oneself with his bizarre, phantasmagoric universe bordering on the absurd demands a sharp eye and mind. The feeling of strangeness undoubtedly arises from the juxtaposition of mostly nocturnal, forsaken and disenchanted urban landscapes, with characters borrowed from art history, visual quotations ranging from Raphael to Gauguin, or personas that evoke different types of humans, each with their own ‘mythology’: the conquistador, the primitive (first man), the consumer, or the Rastafarian played by JB Barret himself, rarely recognizable underneath his drag. Exotic animals, the giraffe, the elephant and zebra mingle on the stage. These contradictory worlds co-exist and exude a muted humour disseminated through signs that require careful deciphering: the signature ‘JBB’ camouflaged in the decor, the relay of the starry blue sky from one photograph to another. The images play on contrasts and antagonisms both on the level of the minute detail (the woman of Behanzin and her graffiti spray paint) as well as in the structuring of the stage (the primitive and the urban landscape). JB Barret intensifies this play and puts the viewer on the wrong track: the primitive of the heights of Fort-de-France is not Amerindian but Papuan. It is out of the mise-en-abîme of his pictorial, literary and cinematographic culture that JB Barret’s humour arises, which colours his images so as to question, with a certain lightness of tone, man’s place in society. Picture and title form a whole and convey a distance and irony in the face of reality, as in Abolir les pensées séparatrices [Abolishing Separatist Thoughts] or Chercher une ouverture [Searching for an Opening].

Taking as our cues: Cindy Sherman, who has a predilection for dressing up; Japanese artist Mariko Mori, who places fantastical characters into nightly, urban scenery; or Sandy Skoglund, who foregrounds absurd environments that interrogate the place of the human, it becomes clear that Jean-Baptiste Barret’s original treatment of images differs markedly. His main interest lies in the relationship between subject and setting rather than the self-portrait as a reflection on his identity and body as in Sherman’s work, for example. He uses photomontage rather than to shoot in actual locations, in contrast to the scenography of Mori and Skoglund.

Dominique Brebion: Your images are highly constructed. How does their conception unfold?

Jean-Baptist Barret: What helps me create is the series. I always think in terms of series. An image never enters my head in isolation. There are inevitably multiple pictures that gel together or tell a story. A series with characters is conceived in advance (even if it evolves later on). A series of ‘empty’ landscapes can be constructed in the course of time and develop less rigorously.

Usually, I set out to photograph places (landscapes). This can be an end in itself, since to my mind one always lives in a place, even if the beings (human beings) who populate it are not visible in the immediate, photographic moment.

Then, the figures appear. The link between the decor and the figure is established in my thoughts. Without a place, there is no person. What matters to man, at least as I see him, is that he is in the world; he inhabits the earth. Man does not exist apart from that relation to geographic space. Insertion was not a philosophical step at first, but it perhaps turned into one later. Is there an affinity between the ‘relativity of the individual’ and the precariousness of life? ‘He is there, but it is possible he could not have been there …’

Interpolating the personas a second time also allows me to realize an image that is even more abstract, a picture that is not true! For the moment, I need to have the feeling that I am fabricating images – even if this does not prevent me from also making direct images and to dream of true reportages.

Jean-Baptist Barret: Yes, of course. I put so much (too much) time into the conception and realization of one image, several days. It is so banal to say that photographic practice is intricately linked to time…fixing, storing in memory, etc. Inevitably, these notions are present in me; I also work for the Photographic Observatory of the DEAL [Direction de l’Environnement, de l’Aménagement et du Logement; Management of the Environment, Spatial Planning and Housing] in Martinique. I even personally made free inventories – absurd, really – solely aimed at standing up, in vain, against time. However, when I take the time to fabricate an image, I refute these temporal notions since these instantaneous constructions are forgeries! My most beautiful images are perhaps those that stand outside of time. Or at least those where an indeterminate moment is telescoped, made to transcend time.

Indeed, I do believe that to view a picture a minimum of time is required. The immediate effect is always a little misleading, as in advertising images. I enjoy looking for clues that allow me to see more in the image, to let it last a little longer. It is like a real interaction with another person; it always takes some time.

DB: You express as much through the image as through the word. What can you tell us about your relation to writing, to literature?

Jean-Baptist Barret: Of course, I do not write literature, but I do like words. Every constructed picture is always accompanied by a title which sometimes gives rise to a smile, or which is aimed at either orienting or disorienting the viewer. My perception of existence is filled with words. Sometimes I read the world like a child would read an alphabet book. The series, the inventory, the list, enumeration, like Georges Perec’s Je me souviens (‘I Remember’). Besides, enumeration seems so important to me in creole orality. A pun always makes me laugh. Double meanings (or even multiple meanings) fascinate me.

An image is a kind of writing and as such it remains very close to words for me. If I had to compare my images to a kind of literature it would be that of the dramatists of the absurd who see ‘man as lost in the world’ [Eugène Ionesco]. Even though it is not the kind of literature that I associate myself with too closely, I am fond of such philosophical truths that turn sententious and as a result go round in circles!

DB: You play with the viewer: signs, false tracks. 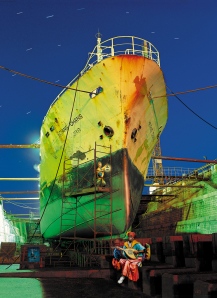 Jean-Baptist Barret: The meaning of the images, words, actions and desires of humans! And then there is always the history of hidden meanings. It is a game of hide-and-seek and the pleasure of discovery. It gives the viewer the chance to participate. It is the interactivity in the digital. What is true? What is not? Since Plato’s cave we know that images are not real, and now we have Photoshop! Having said that, I often have to explain that my manipulations are generally limited to collage. The colours of my night photos are natural, as natural as electric lighting, a sensitive surface or a digital sensor can be!

DB: Would you characterize your usage of the adjective cultivated – in its meaning of cultivated painting, pittura colta – to describe your photographs because of their numerous pictorial, literary and filmic references?

Jean-Baptist Barret:  Perhaps, but it should not be taken too seriously. In fact, I am a little ashamed of these cultural references, but I am unable to create ex nihilo. I cannot manage to reformat my hard disk. These references make me laugh. For the time being, my memory has yet to fail me, so I’m simply enjoying it, that’s all. I hope that those who do not recognize all of my allusions still appreciate my pictures. Besides, most of the time there are only some references that are merely formal, and this is what I prefer. This is the case for a lot of photographers. I’m thinking, for instance, of South African photographer Pieter Hugo, who, in my opinion, knows painting directly or indirectly. If I borrow a pose from a painter of the past I prefer to cite my source since I’ve enjoyed revisiting the author’s work. But this does not mean that I think the same way he does, or that he is beyond reproach. In fact, I would prefer to say that there are multiple meanings at play in my images. The viewer can interpret them as he sees fit.

Imagine that we are setting out to make a photographic inventory of the shop windows of the Rue Arago in Fort-de-France. I think it would be more interesting to do so through recollecting American photographers – Paul Strand and Walker Evans – and the ‘Syrian’ immigration to Martinique rather than pretend as if nothing like this had ever happened. To say that our photographic building stone is small, but that it nonetheless participates in the construction of a common edifice, seems more enriching to me.

If artistic creation (such a grandiose phrase) is a kind of speech, it is so because it stems from a dialogue, from an exchange. As it happens, exchange is deferred and delocalized, but in a time with a worldwide Facebook, this is only natural. A reference is a way to inscribe oneself in a line of human descendants. However, I do realize there is a multitude of other groups and of other humanities (from Papua for example!). I only regret not having access there.

In fact, I am not trying to invent anything new, extraordinary or intellectual. What I intend is to make photos that I would like to view myself and that invite me to travel, with poetry and humour, and explore my human condition. This is what pushes me into making aesthetic pictures, in the most basic sense of the term, because I want to highlight our world and our condition, which can be in turn absurd, marvelous, agonizing and thrilling.