From Wednesday 8 May, you can visit the newly refurbished Frank A. Perret Museum in Saint Pierre, Martinique, which commemorates the devastating eruption of Mount Pelée, in 1902.

The museum was designed by the architect, Olivier Compère, to exude elegant and clear lines in a resolutely modern style. Situated on the esplanade overlooking the Bay of Saint Pierre, its rich, charred wood facade harbours silvery flecks to create a delightful contrast with the deep blue Caribbean Sea. This Japanese burnt-wood technique is called Shu Sugi Ban, and harks back to Saint Pierre’s dramatic past when it was destroyed on 8 May 1902 by a superheated gas cloud from Mount Pelée. The technique is also a highly effective deterrent against the weather and termites. 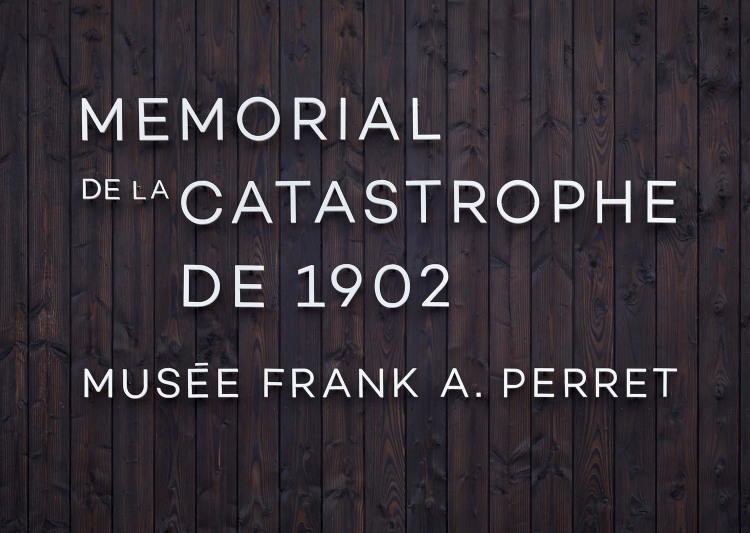 Inside, the exhibition features three areas presenting a cultural and human insight into the disaster, in close conjunction with the nearby Earth Science Centre which focuses on the science and vulcanology.  The forthcoming interpretation centre on heritage and architecture will also provide an additional insight into Saint Pierre’s history, planning and design.  The museum, itself, commemorates the 1902 eruption. It presents a tight timeline embodied through a collection of original, everyday, secular and religious objects, each with charged with emotion.

Items have been deformed, melted or stuck together by the searing heat, such as the bronze bell from Saint Etienne du Centre Church, a grating from the Cyparais dungeon, piles of nails or scissors and even a frosted opal goblet.

André Breton displayed some of them in an exhibition of Surrealist objects at the Ratton Gallery, in 1936, in the  ‘Disturbed Objects’ section. These included a bottle, glass, fork and a spoon retrieved soon after Mount Pelée devastated Saint Pierre in 1902 (from the collection of Governor Merwart).  Brassaï also found some items in one of Picasso’s wardrobes, in 1946. Picasso explained to him, « They come from Martinique. You’re too young to remember the awful disaster that wiped out Saint Pierre, when Mount Pelée erupted in 1902, I think. Yet, although many lives were lost, it also created something too; strange objects like this one, found in the ruins.  All these glasses melted by Earth’s fiery heat are as beautiful as a work of art. »

The anthracite grey walls feature the names of the 7,045 victims that have currently been identified from the 30,000 dead thanks to investigative work by a Martinique-based family-history research association. An audio-guide relates a series of real personal accounts read by actors, taken from postcards and letters sent just before the eruption. Reports and other statements also sweep you up in the tragic events. A handful of images of a follow-up eruption in 1903, filmed by George Méliès, provide an invaluable testament and let you imagine the violence of the burning gas cloud that enveloped the town back on 8 May 1902.  The exhibition layout moves from enclosed spaces to semi-darkness and helps you feel what it must have been like at the time.

This is one of Martinique’s oldest museums. It was opened in 1933 by Frank A. Perret, an American engineer and entrepreneur who was fascinated by vulcanology.  Once, when Mount Pelée suddenly became active again in 1929, Perret travelled to Martinique to help set up instruments to monitor the volcano. He subsequently created this museum, bearing his name, on a municipally-owned plot of land, with support from private financiers. At its peak, in 1990, more than 100,000 people visited the museum and although it was refurbished twice, in 1969 and 1988, it quickly became outdated and impractical, with visitor numbers tailing off to some 20,000 a year.

The renovation of this museum therefore marks the start of a new chapter to develop Saint Pierre’s culture and heritage. A visit to his museum is both informative and moving and is an absolute must.

Open every day of the year from 9am to 6pm

Free entry throughout the month of May