The Boundaries Between: Fashioning in Beyond Fashion

The Boundaries Between: Fashioning in Beyond Fashion 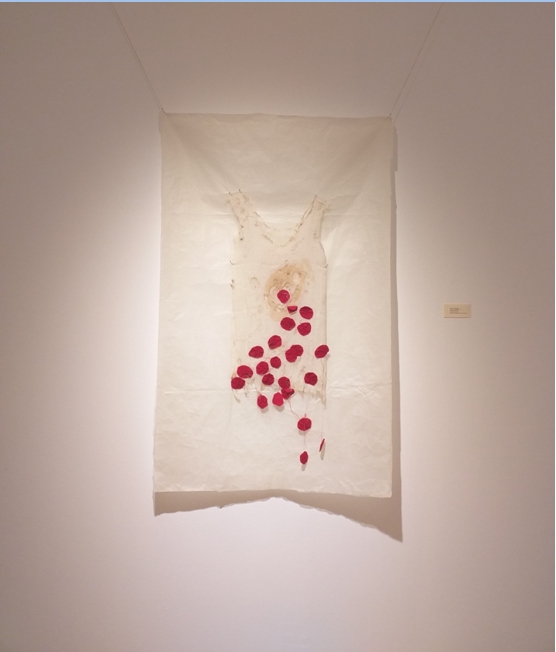 Scrapes and Bruises (2007) Photo courtesy of the author

National Gallery’s exhibition Beyond Fashion is a dialogue about the boundaries – the boundaries between fashion, fashioning and social commentary– and what it means to challenge, push against and blur these boundaries.

The exhibition begins by by locating the works within a historic context of the European distinction between art and the decorative arts. It Then challenges this premise by positioning this boundary as pliable and unnecessary.

Before I begin, I must admit that my engagement with this exhibit is shaped by the work culture at National Gallery’s sister department, Liberty Hall: the Legacy of Marcus Garvey. We start first with an Afro-centered consciousness which seeks to destabilize and undermine legacies of colonialism by encouraging a positive sense of self and Africa. I start here because I recognize the ways in which my interests may ultimately differ from the goals and the agenda of the exhibition curator and artists. As I toured the exhibition, I became convinced that this particular European value need not be engaged at all, as many of the artists continuously respond to a post independence and neo-colonial global community. It led me to ask, what are the values upon which the art of fashioning in Jamaica is built? What intervention is there to be made by a Jamaican practice that challenges the audience’s interaction with art?

As we walk through the galleries, the pieces and installations requires us to open up ourselves and questionifwe truly see ourselves as social actors contributing, maintaining and disrupting class boundaries and upending gender relations. Phillip Thomas’ work “Pimpers Paradise the Terra Nova Nights Edition (2018) shows how fashion can function as tool/weapon of differentiation, subordination and re-colonisation.

Dispersed throughout the background of the piece are images of plantation society, racial subordination and wealth,while in the foreground are the contemporary signatures of wealth of the upwardly mobile. In Thomas’ work, fashion operates as a signifier of class, economic mobility, subordination, and social alienation. Pimpers Paradisereminisces on the ways we continue to hold on to historic symbols of wealth which in turn rely on socio-economic subordination thus reinforcing social and economic power today. What is the materiality of middle class mobility? What do we truly aspire for/to as young professionals and consumers?  Are we,as middle class persons, trapped in a cycleof lusting for upper class materiality to the detriment of our own consciousness?

In the traditional western museum, objects and art are held out of reach of the audience in the name of conservation and preservation. Kerina Chang Fatt’s Scrapes and Bruises (2007) and In Search of Silence I and II (2007) draws us in for reflection, engagement and touch.

Scrapes and Bruises invokes thoughts such as loss of innocence, an awakening, death, violence and the burden of past hurts. It brought to mind the violence that pervades our Jamaican society and the crucifixion of innocence and childhood.  In Search of SilenceI &II demands a delicate touch and quiet consideration of values integral to sustaining one’s emotional health and also that of relationships.

Very often we think of fabric, clothes and fashion as fragile and so for our clothing/material/accessories to last we treat them with utmost care. Yet this exhibit demonstrates that fabric, fashion and fashioning while at times fragile,are durable and capable of provoking thought.

Bearing in mind the range of ideas engaged throughout this exhibit the initial premise under which the discussion began was to challenge the historic European distinction between “fine art” and “decorative art.” O’Neil Lawrence, the curator, argues that Beyond Fashion seeks to take its viewers on a journey looking at the areas where the lines between fashion and art and the work of the artist and the artisan are blurred (Beyond Fashion Catalogue, 2018 pg 6). Yet as one walks through the gallery it becomes clear that this historic European distinctiondoes not reflect the conversations that each work engagednor was it central to artists participating in the first artist talk held December 15, 2018.

In fact the focus of panellists- Lucille Junkere Phillip Thomas, and Yasmin Spiro – was the deconstruction of class, identity and the physical museum space. Decolonisation was central – the decolonisation of the art practice, art consumption and art exhibition. Each practitioner was conscious of the implications – cultural institutions are steeped in and tied to the legacies of colonialism which over time evolved from dismissing African heritage to embracing it. But we are also always in our engagement responding to European interpretations and the ways in which we display and exhibit our work responds to western standards. These practitioners asked us to consider and imagine what a decolonised museum space/gallery would belike in Jamaica.So what are the questions that this exhibit requires us to ask of ourselves, of museum/gallery spaces and of society? What are the values we learn from fashioning (using the curator, O’Neil Lawrence’s term)?

For me, it came back to underlying historic context – decorative art versus fine art –would this boundary stand if we located both practices in a different historical context. What would it mean if we began the discussion about the boundaries between the decorative and fine arts not from a European perspective but rather from an African perspective? In this case, such a discussion would require a defining of African-ness and or how we imagine African-ness. Defining African-ness is essential given the cultural diversity of the African continent as well as the diaspora. Many of us in the diaspora lack any direct connection, for example visits, so we “curate” African-ness through our cultural retentions and information about the continent.What we do know is that Afro-grounded peoples resist Europeanization in a variety of ways, such as developing a materiality of African-ness through dress and accessories, an embracing of African spirituality and a vocabulary that centres a positive sense of an African self.This is also a timely discussion given the initial resistance of former colonial powers – Britain, France and Germany – to return items (including human remains) that were stolen from the continent. Very often this resistance has been grounded in the narrative that African nations and other former colonial possessions lack the infrastructure to care (meaning conserve and preserve) for the items,thusreinforcing European values to art and materialculture which were forcibly removed from their true use. While they have bowed to pressure, as in the case of Germany, we are still forced to ask, are we enslaved to the values of the western museum as formerly colonized peoples? Is it possible for us to create a curatorial practice that does not rely on the traditional museum space?

During the panel discussion, Lucille Junkere used her own artist practice to identify what it would mean to engage an African aesthetic and cultural practice of fashioning. Junkere studied indigo dying among the Yoruba as part of a fellowship. She argued that indigo dying was multilayered and exhibited an alternate set of cultural values from the individualism of the Europe– it was a communal, collective making, highly developed art form. Each person contributes to the overall beauty of the piece. Her research on indigo therefore becomes a sign post of how to reconnect intuitively to our African past as well as an alternate value system. It is through her research on indigo dying, as well as an artistic practice that utilizes the subtlety of embroidery and handmade cotton paper, that she evaluates transatlantic ties between indigo plantations in Clarendon, Jamaica and British textilemills.

As the artist talk progressed, it became possible to tease out ideas that could potentially lead to the creation of democratic, decolonised museum/gallery space.  Each artist emphatically stated that context matters, especially as it relates to the viewers perception of how material culture and art are displayed in the western museum. However, if we are to disrupt this then we have to consider other ways of displaying objects and art. Yasmin Spiro described fabric as the infrastructure while Junkere argued that fashion is wearable art – through both the art of fashioning therefore lends itself to the development of a sustainable art practice.

For me this exhibition is really about the decolonisation of the gallery space as well as the creation of democraticart consumer practice even though I actually have no idea how to articulate the latter. Possibly this discussion may not even be relevant here but at the recent Museums Associations of Caribbean meeting in Barbados (Nov. 2018), galleries and museum spaces in the Harlem, Florida and Chile were asking similar questions about transcending the physical space of the gallery and museum. The first artist talk revealed that Jamaican- born and diaspora artists working in Jamaica are having similar discussions.

But back to Beyond Fashion…as I continue to find myself thinking of Fatt’s cocooning In Search of Silence the pieces here entice us to a physical engagement with art on the issues of gender, class, and nature. However, I would have liked to see something, whether in text or otherwise, that spoke to the ways in which a Jamaican artistic practicechallenged the audience’s interaction with art or even the development of the traditional gallery space. This I believe would open discussions for consumers around why we collect art, how  we exhibit art and what are the interventions that art makes in post independent and neo-colonial spaces.

2 réflexions sur “The Boundaries Between: Fashioning in Beyond Fashion”