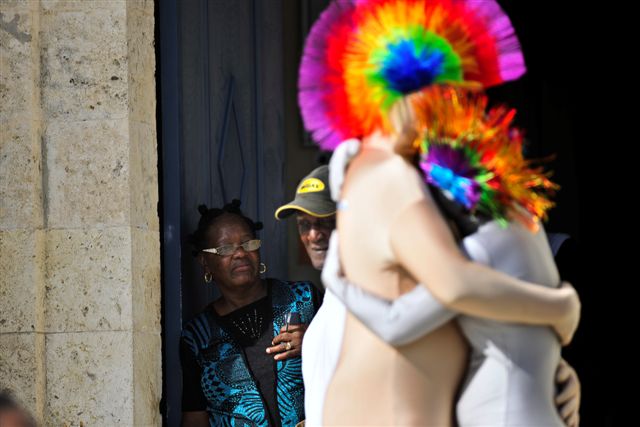 Annabel Guérédrat, dancer and choreographer and Henri Tauliaut, visual artist partnered in recent months to create and complete artistic performances together. To this date they have realized a dozen performative actions mainly in Guadeloupe. They performed for the inauguration of the Caribbean Festival of the Image at the Memorial ACTe and then during a residency at The Moule. Photographs of Robert Charlotte and videos by Jean – Yves Adelo capture these performances.
The generic title, A smell of success, is full of promise

Artistic performances emerged over the decade of 1960-1970 in the footsteps of a few precursors: the Futurists in Italy in the early twentieth century, the Gutai group in Japan, Jackson Pollock with his ”action painting”, Allan Kaprow and John Cage‘s happenings in the fifties. The Viennese actionist and feminist artists then seized the concept. From this moment this artistic practice started to be popular.

It is a unique, transient, interdisciplinary, provocative and disruptive artistic form, produced beyond the conventional context. Improvised or extensively developed, based on a score or a synopsis, it challenges the traditional codes of representation and refutes that art is exclusively embodied in an object. The act of performance engages the body of the artist who becomes artistic material and seeks interaction with the public. The collaboration between a visual artist and a dancer delimits the boundaries of performance and choreographic representation. This also allows the viewer to understand the path that each artist had to take in order to meet each other’s artistic world and practice.
On one hand, we have the choreographic performance with its implications in terms of studio rehearsals, of replay of the same sequence on the stage in front of the audience by a dancer who is not the author; On the other hand, we have the performance, which often is a one shot performance, written before in the form of a score by the creative artist, who becomes the performer.

The performer then involves his own body, in interaction with the public and in all kinds of unexpected spaces.

Classified by their authors into three worlds, Agua, Afro – Punk and Iguana, the performances are influenced by the practice of Body-Mind Centering®. Body-Mind Centering® is a somatic approach of the movement based on the individual sensory experience. It allows one to refine the self-listening, the awareness of one’s movements and therefore allows one to be in a certain honesty and authenticity with his/her body. That is to say, to find balance between mind and body.

Components of the score are realized in slow motion. These components include the “four golden positions” which are the action of walking, the standing, the sitting and the lying position as well as the hug, which is the action of physically embracing each other.

The duo is still at the experimental stage, mainly because the artists are in the process of taming this practice in order to find meeting points between their two separate worlds, visual arts and choreography. This also can be explained by the fact that through their performative actions, and working in water, they explore their ability to better connect to their bodies, to better merge with nature and to regain embryonic sensations. This is the Agua series. They are also experimenting on the interactivity with the audience or the interactivity among an artists’ collective such as in Watergames.

Watergames, which were improvised in a pool and in the sea according to a minimalist score, enable each protagonist to assume all the roles successively.

Seemingly the most interesting performance in terms of impact, took place in a bar, the Stardust coffee, after a first action that happened on the forecourt of the “Moule’s Church”.

During this performance, the two protagonists wearing a one-piece suit, have their eyes and mouth hidden by the fabric of the costume and have therefore lost most of their sensitive and expressive functions. They slowly penetrate the bar and sit at a table. The reaction of the boss and his clients are surprising. Robert Charlotte’s photographs beautifully highlight the episode. He was able to capture the rainbow of feelings on people’s faces. Neither surprise nor rejection, but rather genuine caring and kindness. They are served drinks. They are considered as Saints driven out of the Church and who need to be taken care of.

These first attempts make one curious of what will be the follow up to this work, because it questions the form of « performance » in choreography and visual arts. It also reveals the public’s ability to join the idea of the ”Marvelous” and to adopt these strange beings coming from nowhere.

INTERVIEW:
D.B. : To what extend is the performance adapted to what you wish to transmit and express?
A. G. & H. T. : The art performance as a ritual practice that includes the body, time and space, seems completely appropriate to express what we want because these are our bodies (in performative condition, in extreme slowness, following our “score”, with the 4 golden positions: walking, standing, lying, sitting) that are involved and directly affecting the audience; then body to body, we weave links, social links, touching the fellow individual and letting ourselves be touched (figuratively and also literally) by the same individual, who attends the performance in situ, or fully participates in it. It is an interactive art; we do not want a distanced relationship with the spectator; we want to be in direct relationship with him.

Moreover, in terms of performance, the notion of « real » is questioned through the physical presence of the artist and the focus on his body. When « Tonton » the owner of the Stardust coffee, focuses on our two bodies that he saw (in performance) in the front of the church in the morning and sees us again in the afternoon, seating in his bar, he explains : « it is the Saints that the priest put out during the Mass and that God sends to me right now ». He incorporated us in his fantasy / supernatural reality and welcomed us genuinely; he literally took care of us by offering drinks, making us drink and escorting us outside.

This fantasy / supernatural reality in which he immersed us, allows us to believe that we reinvent through our bodies, our performative postures, the Caribbean myths and this is our goal.
D.B. : Can you please be precise in the meaning of the word Iguana?
A.G. & H.T. : Through our in situ performances in Guadeloupe, we realize, create and invent three worlds:
1/ The Afro-Punk world
2/ The Iguana world
3/ The Aqua world
Iguana refers to the Iroquois wigs on our heads (going along with our gold and silver smooth one-piece outfits) that refers to the Iguanas’ scales. The iguanas are the only animal common to all Caribbean islands. Wearing « iguanesques » outfits means belonging to this Caribbean world; and inventing, calling up mythical or alien characters from this world (the Iguana world).

D.B. : Why are the Titans Afro-Punks? What is Afro-Punk for you?
A.G. & H.T. : The story begins in 2002 with Matthew Morgan and James Spooner, both professionals in the music industry. One like the other, proud representatives of the Afro-American culture, questioned what the identity of this community is in the American society: a community that was too often belittled and ignored. At that time, the collective imaginary was confining African Americans to the dark spheres of gangsta rap and the legendary bling-bling that sticks to their skin. James Spooner knocked these old beliefs with the documentary « Afro Punk » in 2003 that followed two years of travels across the United States to meet with African Americans, major players in the Punk movement. Through the creation of this neologism, James Spooner reaffirmed to the world the existence of a rich cultural fold full of promises inherent in this community. All the Black American people, queer, transgender, all who feel marginalized feel Afro-punk.
For us reusing the term « Afro-Punk » to define our performative acts, at the Memorial ACTe, at the cemetery in Morne à l’Eau or with the Titans trucks means cultivating a hybrid clothing style between carnival and queer (meaning literally “bizarre”), Gothic and sexy at the same time, which in principle would be embarrassing, disturbing. It means affirming a universe and representing ourselves as we want in this world, in order to come out of “doudouistes neocolonial clichés” (bodyscape type) in which one could be locked up. More specifically the Titans are trucks decorated with care by the truckers; these same truckers take a totally punk plastic and aesthetic vocabulary to decorate their trucks: crosses, skulls, acidic or neon colors, strong light. It also plunges us into a pop manga universe and when these trucks are driving at night on the roads of Guadeloupe, they give off a sense of power; they are frightening. They are unconventional, at the limit of a fantasy world.
Our outfits and our charaters are directly associated with the Titans as if they were our avatars, our totems; this explains our enthusiasm to perform with them to bring out the power in our own personalities.

D.B. : Why this reference to the painting of Marcel Duchamp “Nu descendant un escalier » (Nude Descending a Staircase, 1912) ? What is the link between the painting and your performance?

H.T. : As part of a « Transgression (s) » exhibition, Dominique Berthet had proposed in March 2013 to several artists from Martinique, a work to be done around the theme of exceedance, audacity and transgression. At that time, the work Nude Descending a Staircase, by its title and by its polemical position in his time, inspired me to achieve my own Nude Descending a Staircase. I chose as medium the performance; I chose as a place a cemetery and I chose as the score to transgress the cemetery by descending practically naked its staircase with my partner. The performance video that came out was the expected work.
Today, two years later, I suggested to the performer Annabel Guérédrat to create two other Nude Descending a Staircase together, from the score of my performance video dating from March 2013: one at the Mémorial ACTe for the opening of the Caribbean Festival of Image and one in the cemetery of Morne à L’Eau.
At the Mémorial ACTe, Annabel and I are performing Nude Descending a Staircase, to question the master / slave relationship by moving it to the couple and sadomasochistic relationships.
At the Morne à L’Eau cemetery, we added ritual gesture; Annabel « blesses » the dead with a scented liquid taken from a flask « success »; in the hope of reaping success at our global performance project « A smell of success ».