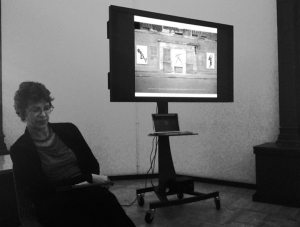 ICF member, art historian and professor at the Barbados Community College Dr. Allison Thompson recently spoke about Barbadian art and culture at the MEWO Kunsthalle in Memmingen, Germany and at the Victoria and Albert Museum in London, England.

The former took up the works of Sonia Boyce and Ewan Atkinson in the exhibition Alles Maskerade! at MEWO Kunsthalle as part of a two-part project with Museum Villa Rot in Burgrieden. The latter was part of the Victoria and Albert Museum’s Art and Existence series, and addressed recent developments in Barbadian art, concentrating on a generation of emerging young artists. Contributing to a larger discussion of how we talk about and look at Caribbean art within a European environment, Thompson’s lectures examined the importance of moving within the optic of the national and the international when interrogating the positionality of these artworks within a wider artistic and cultural discourse.

The exhibition Alles Maskerade! examined the cultural importance of carnival as an international celebration and the transformative capabilities of masquerade as a practice. This multi-disciplinary show brought together works that explore the shifting roles of public and private space, and the fluidity of identity within the context of the masquerade. With artists from Germany, Britain, Switzerland, America and the Caribbean, curator Axel Lapp presented a dialogue between a multitude of images created from and shaped by the varying socio-cultural environments in which they were made.

Discussing masquerade in relation to the Barbadian folk figure Mother Sally, speaker Allison Thompson connected the act of doubling in Sonia Boyce’s video work Crop Over (2007) and Ewan Atkinson’s photographic work Bubalups/Mother Sally: Private Auction (2013). Deeply rooted in colonialism, and emblematic of the synthesis of British traditions and African heritage, Mother Sally originated from the masquerade practices that developed during slavery and represents the re-appropriation of these fused traditions in the formation of a local identity after emancipation. Performed during Crop Over, a yearly festival that began as a celebration of the end of the sugar cane harvest held by the local slave population, Mother Sally was traditionally performed by a man costumed as a woman wearing a mask.

Both Boyce and Atkinson take up the changing identity of Mother Sally as a result of a growing tourist economy in Barbados after the 1980s. To make the local celebration more palatable to the tourist market the wearing of masks was banned and eventually women, rather than men, performed of the folk character. Atkinson presents two Mother Sally figures- the refined, tourist-friendly version and the crude, sexualised and masked version known as Bubalups. Atkinson uses his own body to perform Mother Sally, removing the figure from the streets where she is usually seen, and placing her into the confined space of a hallway illuminated by floodlights in a theatrical and menacing manner.

Reflecting on carnival as a transgressive act, Thompson links this interior depiction of Mother Sally to Boyce’s decision to show the double figure of the folk character within a plantation house setting. Boyce uses video to capture two actors, one male and one female, both claiming to be the real Mother Sally. Thompson connects this to Boyce’s repetition of her own image in earlier works such as From Tarzan to Rambo: English Born ‘Native’ Considers her Relationship to the Constructed/Self-Image and her Roots in Reconstruction, arguing that the pairing of images, as well as the split screen format of this and other video works, can be linked to the doubleness central to the Caribbean experience as a result of colonialism, as described by cultural theorist Stuart Hall.

Thompson’s talk at the Victoria and Albert Museum focused on the work of seven young Barbadian artists who have established a local presence and are moving beyond the borders of the island in an attempt to demand international visibility. Thompson recognises the role that the diaspora has played in enabling contemporary artists to build a strong international network and the impact that these expanded networks have had on the aspirations and goals of young practitioners. Although Thompson lamented the lack of a National Gallery in Barbados, which she connected to a lack of infrastructure, she also acknowledged the importance of the alternative routes that are being taken to strengthen and propagate local art platforms. Thompson highlighted projects such as ICF’s Black Diaspora Visual Arts and Christopher Cozier’s art space in Trinidad Alice Yard, which have been instrumental in fostering opportunities for Caribbean artists, and she emphasised the impact that social media and travel can have on the development of artistic practice.

The inclusion of these seven young artists- Versia Abeda Harris, Sheena Rose, Ronald Williams, Mark King, Simone Asia, Alicia Alleyne, and Simbah Pile- in international exhibitions, residencies and projects has been fundamental in expanding the discourse of Caribbean art practices. Harris’ presence at the 4th International Biennial for Young Artists in Moscow, Williams’ production of works in conjunction with the Commonwealth Games in Glasgow, and Rose’s representation at Biennials in Jamaica (2014), Havana (2012) and Aruba (2012) are testaments to this. The impact of this travel and dissemination of the artists’ work is transformative in its ability to force interaction between Caribbean artists and the major art centers of the world, which are only now beginning to recognise that the narrative of Caribbean art has been forgotten within a wider art historical cannon.

This increase in movement within the optic of the national and the international has lead to a breakdown of the constructed distance between Western and non-Western artistic and cultural discourses. Thompson presented such a breakdown through recalling the experiences of Versia Abeda Harris while attending the Biennial for Young Artists in Moscow. Anticipating the effects of this distance, Harris instead discovered an unexpected relationality between the practices of the international artists in the Biennial. A similar breakdown of cultural distance can also be seen in the photographic works of Leah Gordon and the video works of Sonia Boyce exhibited in Alles Maskerade! Gordon and Boyce’s works demonstrate a relationality between carnivals in Germany and the Caribbean that evoke an international exchange and familiarity that we must continue to explore.

The series Art and Existence and the V&A continues next week, Thursday March 12th, with a lecture on The Rise and Development of Black Print Culture by Patrick Vernon, more details below: http://www.vam.ac.uk/whatson/event/4060/art-and-existence-the-rise-and-development-of-black-print-cultu-59689690/

Information regarding the exhibition Alles Maskerade! that was held at MEWO Kunsthalle, Memmingen from November 22nd 2014 to February 22nd 2015 can be found below:
http://www.mewo-kunsthalle.de/ausstellungen/allesmaskerade.html