“Can creolization avoid incoherence? […] Is being-in-the-world unthinkable without the weight of the map, mapping the site of presence/place, yet never able to reveal any essential essence of identity; leaving opaque the mystery of living, life, the figures of self?” 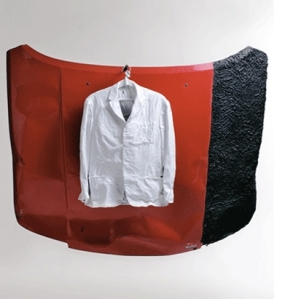 What does it mean to be global for the Caribbean nowadays? The emergence of different generations of artists from the French speaking  Antilles (“a group of works from a part of the Caribbean that – for lack of a better word – have been coined as “French.””) has transformed Caribbean artistic practices, forcing all the elements implied in the ´local` art system to engage with new audiences and to broaden their horizon. Although it is difficult to deny their importance, some issues like the discussion between the local and the global, the expression of tradition and identity, the search for resistance, have to be included in a more comprehensive discourse, based on the conditions of negotiation and the dialogue that Caribbean communities have developed among them and with the rest of the planet.

It seems that artists are taking an active role in voicing the main contradictions of present day communities. By doing so, they surpass any possible classification in term of media or addressed issues to become intellectuals, entering the realm of the public debate in order to engage with question related to race, coexistence, dialogue and citizenship. This is especially important in the Caribbean, where any artistic effort has to face important difficulties in order to survive. The task of finding interlocutors for the artistic experience, appears as a shared concern among the artists included in Global Caribbean IV.

Art is no longer committed to a search for authenticity. Creators have found themselves within a position close to the assertion of Michaeline Crichlow (op.cit., p.28) of creolization as “an ongoing dynamic within complex open systems”. From that “present continuous”, discourses  as shown  here  are reshaping their context from a position that eludes binary options. Commitment to the fact of being for a place has always been a heavy charge for Antillean artists. Without dismissing the importance of space, one of the major achievements of the last decades has been to open freely from a location, interacting with audiences from any part of the world.

That spirit of defying the commitment to a single location can be observed in the work of Eddie Firmin “Ano” and Christian Bertin. The first one, who has been a pioneer in the introduction of new artistic media in the French Antilles, is particularly concerned with the rewriting of a Caribbean material sense which can be observed in objects from the everyday. Bertin shares a similar worry about the nature and the multiple meaning of objects that, in his case, has included recently an interest for the performative politics of reception of group of symbols from different provenances.

The ambiguity that Bertin and Ano transfer to objects is directed towards historical imaginaries in the work of Thierry Tian-Sio-Po and Phillipe Thomarel. The Guyanese is an expert in revealing the Baroque multiplicity of American past, which appears as an unresolved pastiche made with elements from everywhere. In the case of Thomarel, an interest is shown in representing the contradictions implied in the making of Caribbean societies. By questioning the binary logic present in many historical discourses on the history of the region, he succeeds in connecting  past and present in a critical approach.

Past and present coexist in the work of Valérie John, 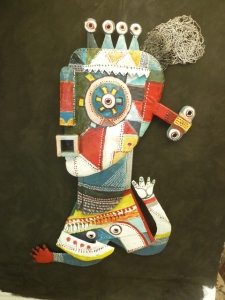 Christophe Mert, Thierry Jarrin and Mirtho Linguet. John deals directly with the problems related to visual archives. Visiting Africa frequently, the artists has developed a research activity around the notion of palimpsest that constantly interacts with mobility, displacement, the lacks of official memories and the past of time that configure Caribbean history. The anthropologic figures of Merz and Jarrin seems to arise from an undifferentiated moment that fits perfectly to the in progress condition of Caribbean societies. The photographs of Linguet are equally expressive of the heterogeneity and internationality of Caribbean contexts. The immediacy of the represented people could be read as a broadening of the spaces and stories that are usually attached to the region.

The installations of Luz Severino and Bruno Pédurand direct this critical inquiry towards society and community. By questioning the logic that determines the configuration of human communities, they examine the conditions that can lead to better cohesive social practices. Laurent Valère and Jean-Marc Hunt configure, on them behalf, playful imaginaries that only after a long contemplation show their true, disturbing face, making us conscious about the distance between representation and reality within the Caribbean context.  Finally, the dialogue is completed by the work of two experienced artists, Ernest Breleur and Louis Laouchez, whose research on a contemporary language for Caribbean discourses has been essential in the renovation of artistic practice in the last decades.

´On the curatorially aspect`, we can outline the encounter of two of the most active voices of the region, those of Édouard Duval Carrié and the Fondation Clément, who are decisively portraying a new image for Caribbean visual arts by gathering experiences that are not attached to restrictive visions of identity and belonging and that, rather, seems to be conscious of the richness and the heterogeneity of regional creativity in the present moment.        The importance of new Caribbean imaginaries like those is, then, enhanced by the fact that they break off from the boundaries between local artistic systems, allowing creators to establish a more flexible relation with audiences from different locations and to insert themselves directly in the realm of the contemporary.

Configuring an archipelagic reality, a cohesive yet not rigid ensemble, Antillean artists are generating a cultural process unprecedented in the region. The histories that Caribbean art narrates are more related, thus, to this assertive will of location than to any temporal, formal or thematic delimitation. Among the examined artists could be observed, in that sense, an interest for inserting in a specific but difficult to define context that expands itself in order to reach any other position in the globe.

About the author: Carlos Garrido Castellano works at the Department of Art History of the University of Granada. He completed a PhD with an essay entitled “Continent of insularities. Art and Context in the Caribbean at the Turn of the Twentieth Century”. He has done long term research stays in countries like India, Jamaica, Serbia, Cuba, Dominican Republic, Martinique, Guadeloupe, Trinidad Tobago, the United States or Puerto Rico, and has collaborated with different national and international academic journals. He has been member of several research projects linked to Contemporary art and Caribbean and Latin American studies. He is the author of the books “Museos locales y didáctica de la arqueología” (Spain, 2011) and “Arte en Diálogo. Conversaciones sobre práctica artística contemporánea, identidad e integración cultural en República Dominicana. (Santo Domingo (Dominican Republic, 2011), and co-author of De los últimos creadores de mapas. Pensamiento crítico y exposiciones colectivas de arte caribeño (Madrid, Spain, 2012) He has curated art exhibitions in museums and art centers of Spain, Dominican Republic, Puerto Rico or Cuba. Recently he has coordinated two special issues on recent Caribbean art in the Papeles de Cultura Contemporánea Journal, as well as the International Conference “Cartographies of Gender. II International Conference on Caribbean Culture” in the University Carlos III of Madrid. He is also a member  of AICA (International Association of Art Critics) South Caribbean.