Born in Guyana in 1964.
Now living and working in Guyana. 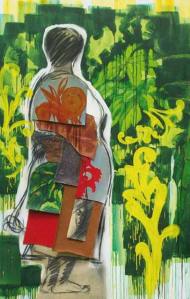 Dominique Brebion: Could you briefly describe your approach to the plastic arts?

Thierry Tian Sio Po: Since the end of the 1980s, my work has focused on trying to show what is complex and inextricable within us, either by combining figures and signs, or in the form of a landscape bordering on abstraction, like the echo of a reality whose appearances are both the effects of monolithic, invasive thinking and ways of resisting it.

D. B.: Today, your staging of the inextricable is seeking to be permeated with the idea of motion, profusion, proliferation, excess, irony about our contradictions and about embellishment, the precious and the lavish.

T. T. S. P.: There is a critical intention behind rerouting the “baroque feast”. The idea is to express the importance of the meaning carried by this justification of the work.

D. B.: How does one pursue a career as an artist living in Guyana?

T. T. S. P.: By attempting to find one’s way in the complexity that characterizes us. That means being constantly on the lookout for relevant language, allowing ourselves some recognition outside the country, which does not exclude wariness towards prevailing international standards. It also means having an odd relationship with the local media, which are not interested in what is really at stake in artistic creation and tend to widen the gap between the public and creators.

It also means, first of all, producing art at all costs, sometimes with very poor resources, knowing that wealthy local residents know nothing about the advantages of philanthropy, which has delayed the arrival of an art market, and secondly, by navigating the nascent history of art in our regions.

Having an artistic career in Guyana means waiting for requests from art institutions that choose to relinquish a certain idea of otherness and a neo-exotic view of works from “elsewhere”.

D. B.: How do you view the Caribbean artistic milieu in the archipelago and in the diaspora and its ability to be integrated into the international market?

T. T. S. P.: The questioning of languages in the Caribbean region and in its diaspora has become quite visible in the last few years. Many works succeed in being rooted geographically by avoiding this form of exoticism towards itself. They are rooted geographically in their connection to politics and history, in the social approach and in the question of identity, which remains an issue – by adopting new attitudes. The problem today is whether these new attitudes appear so that the artworks will be integrated into the international market or out of creative necessity. If our own art institutions fail to learn to appreciate the works of our regions in their social and historical context, any attempt to approach this market will be in vain, even if the artist accepts its standards.