Veerle Poupeye is today the Director of the National Gallery of Jamaica for which she has worked before as a curator. She also had an assignment as coordinator of the Visual Arts programme with the MultiCare Foundation, then she taught Art History in the Edna Manley College, in the Emory University, Atlanta, New-York University and then in the University of the West Indies.

She has published many books, Caribbean Arts (1998), edited in Thames and Hudson’s World of Art series, and Modern Jamaican Art (1998). She has collaborated in many collective reference publications and specifically in Caribbean Crossroads of the World (2012).

This is not Veerle Poupeye’s first visit to Martinique as she visited artists’ studios in 1995 in order to gather material for her book Caribbean Art. Then she came back on more occasions for International Congress of AICA (Art Critics International Association) in 2003, and for The Caribbean contemporary art seminary or ‘Parcours Martinique’ (2008), and the Black Jacobins Symposium (2011) in Fondation Clément in Martinique. This week, she has brought a work from the National Gallery of Jamaica, The Great Rape by Martin Bartley, lent by the National gallery to the Caribbean Remix exhibition.

Could you introduce the National gallery of Jamaica?

It is a governmental public institution established in 1974 originally located in Devon House in the center of Kingston. Since 1982 the National Gallery is in a modern building near the waterfront. Projects are made indoors in the hall as well as outdoors. For example artist Blue Curry, from the Bahamas developed a project in the streets of Kingston for the last biennial. Recently, in 2014 the National gallery of Jamaica has opened a new site in Montego Bay, within a two- hour drive from Kingston, in a tourist environment. A solo exhibition of Renée Cox’s works was organized there. This was the second exhibition in Montego Bay and her work was shown as part of the 2014 Biennial.

We have some more historical galleries such as Edna Manley Gallery, Mallica ‘Kapo’ Reynolds Gallery, the Intuitive gallery, and also temporary exhibition sites. 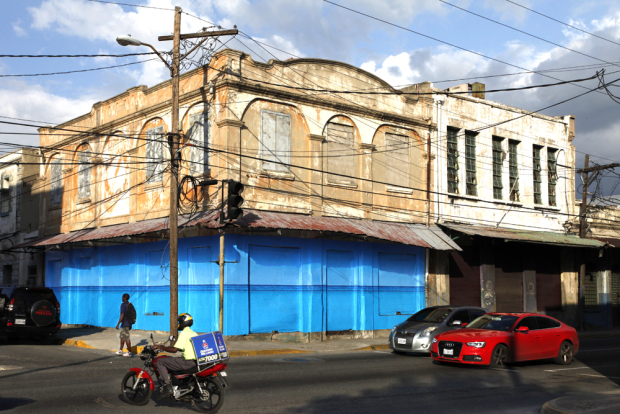 Blue Curry – PARADISE.jpg, at the corner of Orange Street and Port Royal Street

How big is the National Gallery?

The National Gallery is 42,000 square feet whereas the site in Montego Bay is 3,000 square feet. The latter is part of a larger structure the Montego Bay Cultural Centre which also houses a branch of the National Museum Jamaica and a performing arts space. The idea is to federate a very diverse public. Programmes such as Last Sunday, open to everybody including families and school children every last Sunday, are a success. We are present in social media too. I work with a team of 31 and 7 members work in the curatorial department and we also train young assistants, the future team, after university.

How many exhibitions do you have per year?

We have four in Kingston and four in Montego Bay.

We have developed different projects, and more specifically a biennial, originally national, recently open to international artists. Since 2014, we have wished to change the status of the biennial and give it a more international quality that is why we intend to continue to invite more international artists. Artists such as Renée Cox (USA/Jamaica) Richard Mark Rawlins (Trinidad), Blue Curry (Bahamas), James Cooper (Bermuda), Sheena Rose (Barbados) and Gilles Elie-dit-Cosaque (Martinique) participated in this event in 2014.

Recently, on April 24th the Digital exhibition for which we had the participation of David Gumbs and Henri Tauliaut from Martinique and Luk Gama from Guadeloupe was inaugurated. In December 2015, the NGJ has launched invitations to visual artists from the Caribbean and the diaspora asking them to submit their digital creations to a selection committee. Among the 73 applications, videos, animations, short films, Gifs, digital photography, illustrations, and interactive installations, 39 were accepted. The Digital project will be opened to the public until July. We hope to establish durable relationships in the future with a generation of young artists that we want to promote. That is a real challenge to signal to the Caribbean that we exist and that we wish to be an active part of new regional dialogues, since there are many obstacles, such as the cost of travel and transport and the administrative challenges with Customs etcetera. We are thinking more specifically of an association between curators, Directors of art museum, directors of galleries, a lobby including different regions so that we could obtain the exemption of cost for all the projects and collaborate on various projects and exchanges. 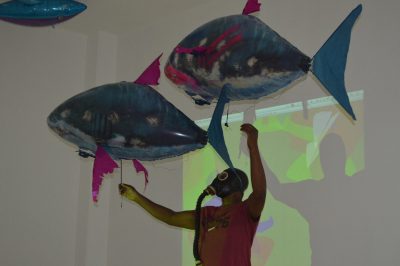 The objective of Digital corresponded not only with an innovating approach to the contemporary visual arts but also permitted to eliminate the cost and transport difficulties while at the same time the needs for equipment increased. However, equipment is a long term investment and it will be used for many exhibitions and even more sometimes lent to other national galleries. This was the case recently between the National Art Gallery of the Bahamas and the National Gallery of the Cayman Islands.

We are currently working with the British Council on projects and workshops. Artist Graham Fagin from Scotland takes part in this project that we hope to finalize in 2017, a multichannel video installation funded by the British Council.

How many visitors are there per year?

The gallery has 29,000 visitors every year, but we are also active online with 65,000 local and international visits to our blog since the start of 2016 and a growing following on Facebook, Twitter, Vimeo and Instagram. We hope to reach more and more people and we make a special effort to widen the social profile of our audiences.

What about the financial resources of the National Gallery?

We depend on the Ministry of Culture and our budget covers salaries and daily expenses. To this we can add the financial help from sponsors. The Tourism Enhancement Fund supports the National Gallery West. We also have the support of CHASE and other sources. In the future we hope to have some financial support from the Interamerica Development Bank, We have also benefitted from the Inter-American Development Fund, which was a major funder of the 2014 Jamaica Biennial and we intend to make more active use of international funding sources for future projects. Other local funding from corporate sponsors for example helped finance the Barrington Watson Retrospective project in 2015.

What will this visit in Martinique represent for you?

My visit here will help me to learn as much as possible and I will also see the architectural realization of Fondation Clément. As there is a project to open an extension of the National Gallery we are currently working on the architectural programme. I am then interested in the orientations chosen by the foundation to integrate a new structure into something already existing and in the choice of material.

This is also an opportunity for me to introduce new talents. I consider Oneika Russell and Marvin Batley as pioneers as they are interested in new media and also for the skills they have acquired abroad. Marvin Bartley has studied only in Jamaica. Oneika Russell has studied in Jamaica, England and Japan and has also spent time in Singapore as the recipient of a Commonwealth Foundation Fellowship.

How much have the artistic practices evolved since the publication of your book Caribbean Art in 1998?

I can notice that more Jamaican artists move to study abroad, and there are several new schools and programmes, such as the degree programme at the Edna Manley College and the art school in Martinique. This has resulted in more diversity and a lot of new, younger artists with lots of ambition and high expectations. Moreover the artists are more interested in questioning theory and criticism and, of course, in the possibilities presented by new, digital media.. Also more women are involved in the visual arts and also in curatorship, criticism and arts management. There is also a lot more communication and exchange within the region, aided by social media and there are several influential private initiatives with a regional focus, such as ARC Magazine, the Tilting Axis meetings, Alice Yard in Trinidad, Popop Studios in the Bahamas, Fresh Milk in Barbados and NLS in Jamaica . Overall, the Caribbean contemporary art scene is a lot more dynamic than in 1998 and is no longer dominated by Cuba, with strong contributions from all the language groups in the region and also from the diaspora.

What about your next projects?

I completed my  dissertation about art in the Caribbean , economic and ideological factors in 2010  and I am now working on getting all or part of it out in book form.  Then for another project I will look into Tourism and its social implications. This could result in a book, an exhibition or perhaps both.

Concerning the NGJ we are now preparing an important exhibition, Kingston, about the relationships between the Jamaican capital and the artistic developments. And another major project is the upcoming Jamaica Biennial 2016, which we continue to develop along the lines we started in 2014.